Israel Haggis – His surname may have connections with the French verb Agacer meaning to bother, irritate, annoy, bug, nag or resent and with a noun Agacè, meaning a tease.  Coincidentally these may well have some relevance to the sort of person he was.

Haggis played for Cambridge and Chesterton, and one or two other clubs less often, from 1833 to 1849, but he also had a knack, intentionally or not, for attracting the attention of the press due to his work and interests, clashes with the law, licensing authorities and his wife, and, on one occasion at least, his self-promotion. Because of this, his story has useful things to say about the lot of the semi-professional cricketer and life in general in 1840s Cambridge.

Born in Cambridge in 1811, Haggis batted in a “beautiful”, “free and shewy style” and was a fine versatile fielder.  Unfortunately, his eagerness when batting often led to embarrassing run outs and a susceptibility to being caught.  He made relatively few high scores.  This perhaps compensated the fielding side for his habit, after each delivery, of retreating behind the wicket and taking an exasperatingly long while to return to the crease – Israel Haggis the tease?

He made his first known appearance on the cricket field for Chesterton against Newmarket in 1833, although Chesterton’s matches at that time were rarely reported in full and he may have played previously.  His first match for Cambridge Town was in the second Town v Gown match of 1834, scoring 0.  His next appearance, in the same year, was as substitute in one of the biggest matches played by a Cambridge side to that date, for a Cambridgeshire side mostly made up of Cambridge and Chatteris players against Nottingham/Nottinghamshire.  Over the next few years he turned out in a single wicket match and for the Town, Chesterton and Cambridge Castle, with a top score of 36 not out for Cambridge Town against the university in 1837.  By then he was considered senior enough to be excluded, alongside Edwards and Fenner, from a friendly  match between an embryo Town Club and a university side.  A year later he was in impressive company when he, Fenner and Caldecourt lost a single wicket match to the MCC’s Adams, Wenman, and Bathurst at Lord’s.  In 1840 he contributed 44 to a century opening stand with Charles Pryor for the Town Club against students in summer residence as well as 55 and 30 – at the expense of several runouts – for St Andrew the Less against Saffron Walden.  He also challenged J Adams of Saffron Walden to a single wicket match.  A year later either his reputation, or association with Fenner, secured selection for England against Kent at Canterbury, alongside his club captain. Haggis appeared in just half of the Cambridge Town and County Club’s 26 matches between 1844 and 1847, ironically making his highest score of 21 in his last, the Town v Gown match of 1847.  After that club’s demise he continued to play for Cambridge sides until his death, just three days after playing for the town against Gravesend in August 1849.

By then, however, Israel had long established a second reputation – for newsworthiness. In his first non-cricket appearance that I know of, in 1836, he was the subject of the first of two charges for selling spirits without a licence, this time at Cambridge’s famous Stourbridge Fair. He was probably already the landlord of the Flower Pot, moving by 1837 to the Six Bells in Covent Garden.   He was to go on to be mine host at the New Inn on Parker’s Piece, the Tiger on East Road and the Salmon in Fair Street.

1836 also saw the first instance of Haggis reportedly being assaulted. There were to be several instances of his being the plaintiff or defendant in assault cases. Being a pub landlord and his marriage were both risky businesses.  So, it seems, was watching cricket on Parker’s Piece.  In June 1840, while watching a match on Cambridge’s public nursery for sport, he remonstrated with some students who were teasing his horse, only to be twice threatened at gunpoint.  In an example, perhaps, of issues that had caused bad feeling between town and university for hundreds of years, the university procter bound over the guilty student to keep the peace and allowed him to leave town without facing any further action.

For a while, at least Haggis seems to have fitted into Cambridge life amicably enough.  In 1841 he signed a petition for proposed changes to the commons to be discussed and played host to the East and West Barnwell Reform Association.  Two years later he donated towards the restoration fund for St Botolph’s Church and won a tender to supply the Union workhouse with ale and porter.

When he took up the lease of the New Inn in 1844 he seemed determined to both take advantage of the current excitement around the new Town and County Club and to present himself in the best possible light: 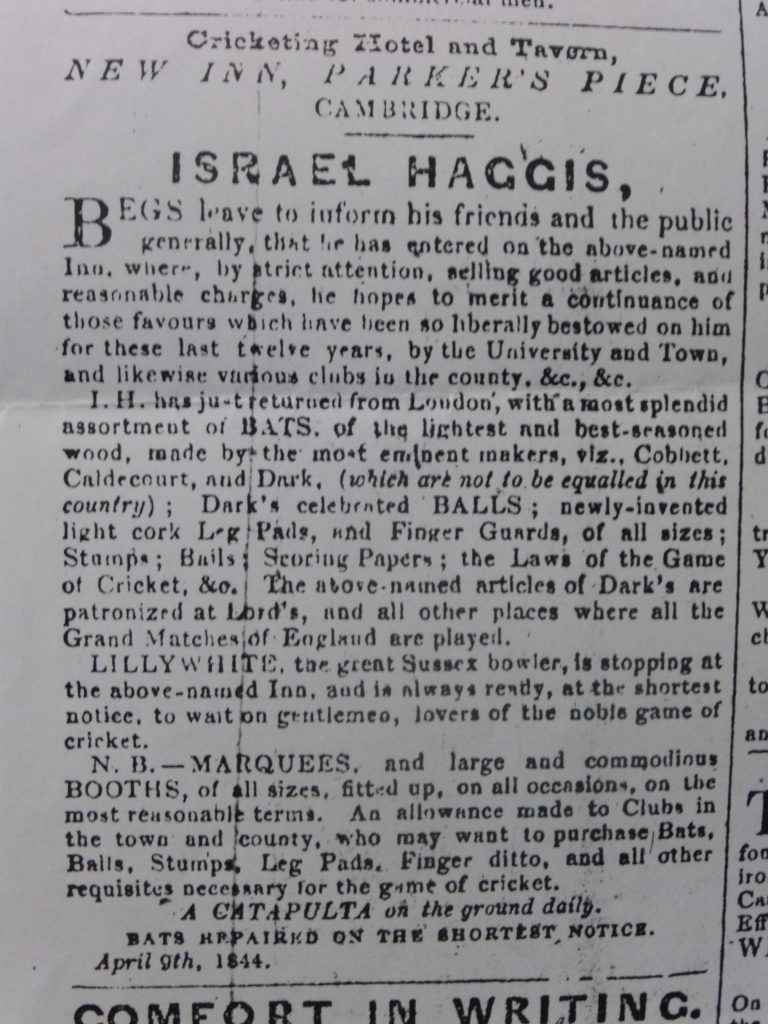 In November of that year one of the New Inn’s guests was the pedestrian Alabaster, accomplishing 518 miles of an attempt to walk 1,000 miles and 1,000 furlongs in 1,000 hours: “It is stated to us that Mr Haggis, of the New Inn, where Alabaster is staying, can produce men of good credit and respectability, who will vouch for Alabaster’s executing his task throughout the night hours as well as the day, a fact which some parties have doubted.”

Almost exactly a year later, however, the New Inn was again up to let.During that year six bats, stumps and a ball were stolen from the St John’s College tent on Parker’s Piece, of which Israel had supervision. The defendant, George Johnson, though seen offering the stolen bats for sale, was acquitted on the grounds of his tender age of eight.

Court reports of this case give a useful insight into the increasing importance of cricket to Cambridge. Not only was Haggis managing the St John’s tent, but also Charles Page was his servant/assistant, Robert Ringwood a “cricket-bat dealer”, and David Kelly a ball collector, a necessary role on the large expanse of Parker’s Piece. For at least the Easter term there would have been several colleges providing similar work to men like Haggis, Page and Kelly and all provided regular work for Ringwood and, later, his partner Dan Hayward.  The university had long been an important source of trade and employment to townsfolk and cricket was beginning to fit that pattern.

Tent minding was only one of Haggis’s occupations.  He may well have been the S Haggis credited in 1847 with laying out and managing the student’s private cricket field behind the town gaol that was to become half of Fenner’s ground.  Like Fenner he took opportunities when they came along. He was landlord of five different pubs.  Most colourfully, he was the successful proprietor of a dance band and booth attending local fairs and events. Thus, in 1840 he contributed to Horseheath’s celebrations of one Stanlake Batson junior so that “ the ladies had a very capital tea provided for them in Haggis’s booth, which, with a band of music, was engaged for the occasion….”  Other known beneficiaries of his hospitality included March, Stourbridge, Saffron Walden, Norwich and Peterborough Fairs, at the latter of which he suffered from flooding in 1848, and Cambridge Oddfellows.

It was while with his dance booth at a fair in Audley End in 1849 that Haggis featured in his last newspaper story. Despite the region being in the throes of a cholera epidemic, he insisted on eating a meal of suspect salmon, which he had bought the previous day in London, and soon developed symptoms of the disease. Cholera being feared, he was left in his tent unattended apart from periodic visits from a local doctor for over two days and died within an hour of his return to Cambridge. The newspapers were divided in their sympathy for his wife Sarah (nee Hankin). Having a history of disputes, the couple were by then separated and there was even a report of a “disgraceful scene” in which Sarah argued publicly with other relatives over Israel’s possessions. Israel’s new partner also became ill but I have found no record to indicate whether or not she recovered.

Israel’s possessions, incidentally, would probably not have been many. Back in 1847 he had been in debtor’s prison and his stories illustrate how little financial security was to be found in playing cricket at this time.  Supplementing his income in several ways to make ends meet, he was probably too busy to sit for Felix’s picture. Most Cambridge cricketers played professionally but on a very part-time basis. The likes of Diver and Arnold would take up paid engagements elsewhere as the status of the cricket professional improved through the 1840s and 50s, but no Cambridge club before at least the 1890s played enough matches to earn its players a living. The manner of his death also brings home the perilous nature of life in 19th century England. At least he managed, in the words of one contemporary tribute to achieve “some cricketing fame”.