Who Played Who? – mapping in progress

In an attempt to get a clearer idea of who played who, in and around Cambridgeshire, as the game developed, I have recently been compiling maps of the county showing which teams played which and when.   Lines drawn between place names indicate matches played between the two.  Dates alongside the lines give years in which matches were played.  They are only roughly drawn and hard to read in places but nevertheless the visual results are interesting.

Between 1744 and 1800, Wisbech seems to have been the only team in the north of the county to have played more than one reported match.  Of its six matches only two were against another Cambridgeshire side, March.  The rest took Wisbech out of county by some distance to play Moulton of Lincolnshire, Downham Market and Methwold of Norfolk, and Peterborough of Northampton.

In the centre of the county Manea and Chatteris played each other, with each playing St Ives of Huntingdonshire.

St Ives provided a link with the south of the county as it was one of the three teams played by Cambridge. Of the other two, Newmarket was in Cambridgeshire and Saffron Walden in Essex.  Newmarket also played Stowmarket  and Mildenhall with Worlington of Suffolk, whilst Royston played two matches against Saffron Walden.

Thus there was a clear pattern of the north, centre and south of the county having its own distinct set of opponents, with Wisbech, Cambridge and Newmarket providing hubs for matches with mostly out of county opposition and Manea and Chatteris also traversing the border. 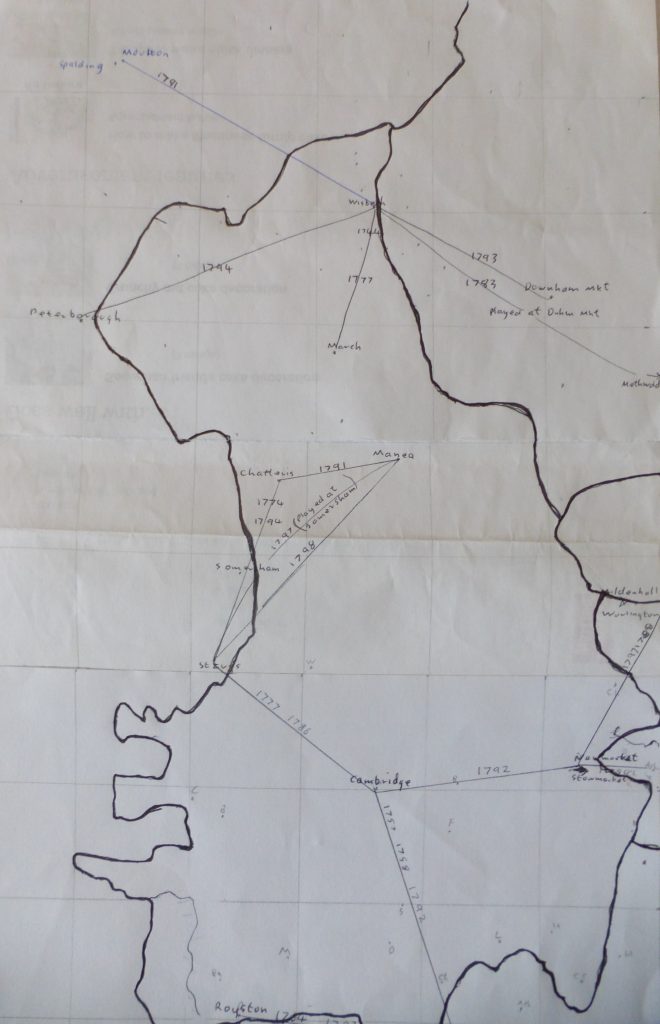 In this period there was still no contact between teams in the south of the county and those further north.

Wisbech still provided a northern hub, playing Downham Market, Emneth and Terrington of Norfolk , Sutton and Tydd of Lincolnshire, Peterborough of Northamptonshire and March and Newton of Cambridgeshire.  Wisbech also provided a neutral ground on two occasions for Thorney to play Downham Market and Leverington of Cambridgeshire.  Thorney formed a second hub, playing Spalding of Lincolnshire, Burley on the Hill and Oakham of Rutland, Peterborough, Downham Market, and Leverington.

In the south, Cambridge and Newmarket were still the two most active teams. Cambridge played St Ives, Saffron Walden, Royston on the Cambridgeshire/Hertfordshire border and ventured further afield to play Ware and Hitchin of Hertfordshire.  Newmarket played Mildenhall and Bury St Edmunds of Suffolk and Thetford of Norfolk.

The pattern remained of north, south and centre playing distinct sets of opponents, but the centre differed in that most of its matches involved relatively local Cambridgeshire teams.  This may have been because of road networks being better for long journeys in the north and south, but also may have been due to the likes of Wisbech and Cambridge having a wider reputation outside of the county. 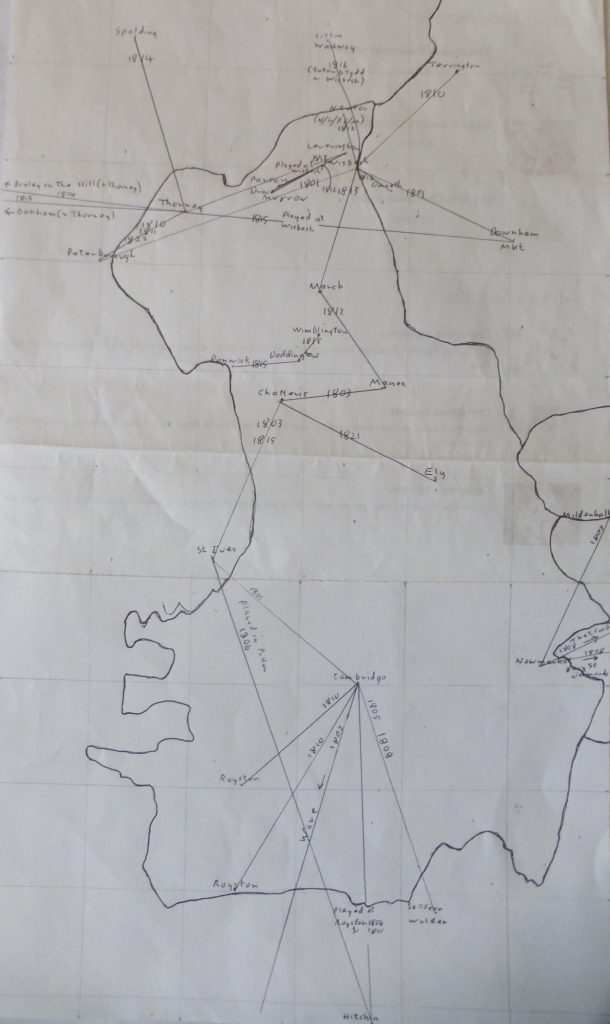 Now things got more lively.  For the first time in this exercise the map is connected up.  Cambridge teams played Chatteris, Ely, Soham and March.  This period also saw Cambridgeshire county sides which included players from both Cambridge and Chatteris.

Wisbech, Thorney, Cambridge and Newmarket were joined as centres of cricket activity by  Ely and Chatteris centrally,  Royston in the far south, and March and French Drove in the  north.  The French Drove Union club  (sometimes called Thorney Fen)  was presumably a combination of players from the silt fens to the north east of Thorney that, during these fifteen or so years, took on Spalding, Boston, Holbeach and Long Sutton of Lincolnshire, Peterborough and Thorney.

A further new development was an increase in local matches such as Walsoken v Elm, Doddington v Chatteris and Ely v Soham.  Where this was particularly marked, however , was in the south of the county with teams south of Cambridge such as Comberton, Longstowe, Bourn, Barrington Duxford, Sawston, West Wratting and others taking on their neighbouring villages. 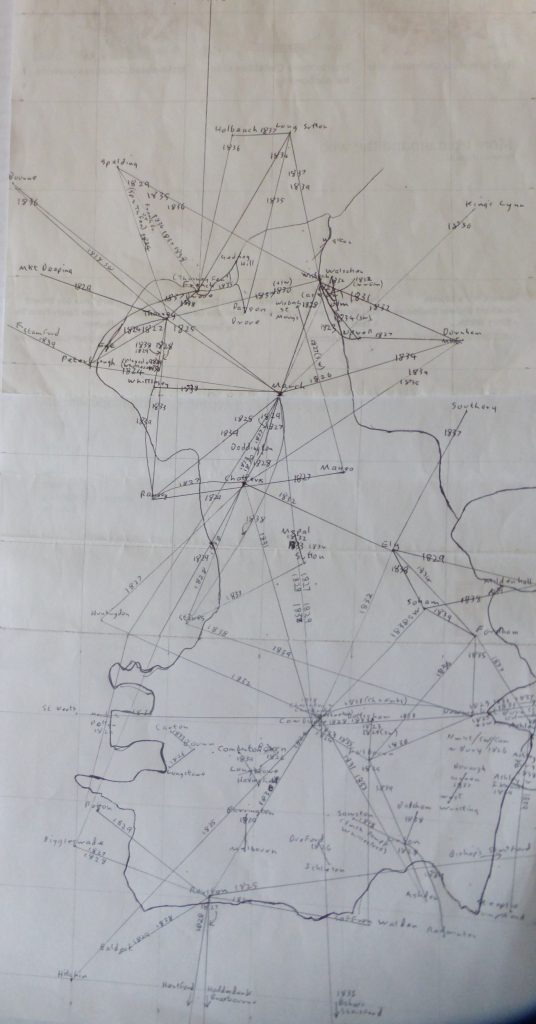 The map now gets cluttered, particularly in the south.  Several fixtures had become annual events and the south of the county continued to produce new local rivalries such as Bourn v Haslingfield, Fowlmere v Foxton and Swaffham v Bottisham.   Apart from a cluster of teams around Wisbech  and Doddington, the north and centre of the county looks relatively clear, with teams such as Ely, Chatteris, March, Wisbech and Thorney still travelling some distance to play their cricket, often out of county. Towards the end of the 1848 season Cambridge played a county side got up by Francis Bavin of Wimblington, March and Ely (and probably others).  The county side included five Wisbech players, three from Chatteris, and one from March.  Another indication that the geographical barriers were breaking down, even if this was largely an Isle of Ely side. 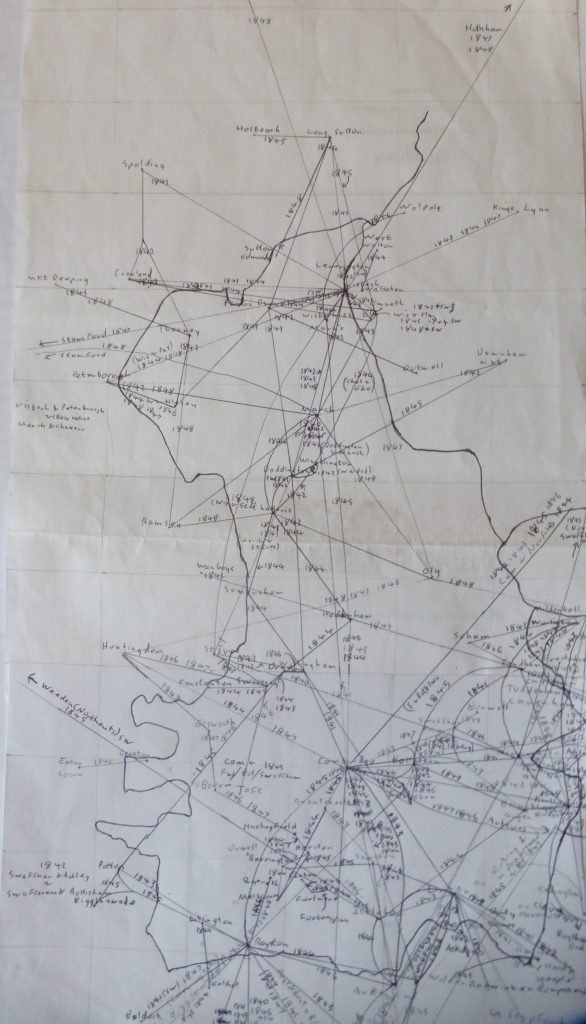