My Research So Far

Those clubs’ need for decent opposition cemented new contacts with teams in the north of the county such as March and Chatteris and eventually to the Union Club playing London club Islington Albion and the Hoop taking on Norfolk’s Swaffham.

Elsewhere cricket spread to more and more villages throughout the county. Thus was the ground prepared for the concept of Cambridgeshire cricket as, at least slightly, a more unified entity rather than the earlier pattern of scattered but isolated pockets of the game.

Fuller Pilch of Norfolk, Kent and Cambridgeshire
1823 – Fuller Pilch played on Parker’s Piece in Cambridge for Bury St Edmunds against Biggleswade.  The latter complained about this hitherto unknown (to them) player being included as a bowler and he was apparently prevented from bowling in that match.
1826 – The CCC played its last match having only played the odd match per season over the previous few years.
1828 – by 1828 the CCC had been replaced by the Union, Castle, Fountain and Hoop clubs which were all based at Cambridge pubs.
1824-36 – The pub clubs followed in the CCC’s footsteps by playing old opponents such as Saffron Walden, Biggleswade and Newmarket and trod new ground by taking on such teams as Swaffham of Norfolk, Chatteris, March and Islington Albion.
1832 – A Cambridgeshire side, including players from Cambridge and Chatteris, Sir St Vincent Cotton, playboy and MCC member, from Madingley and given players Fuller Pilch and William Caldecourt, defeated the MCC twice.  A Cambridge Town side, including Pilch and Caldecourt,  defeated the same opponents.  These victories were in large part thanks to the performances of Fuller Pilch who scored: 50 and 41 not out in the first Cambridgeshire match, as well as taking 5 wickets and a catch; 28 and 6 wickets in the 2nd match; and  18 and 2 not out with 5 wickets and a catch for the Town side.

help from his patronage they were probably disappointed.  He was a profligate gambler who spent most of his mother’s money.  He is said once to have bet £1,000 on a snail race.

In his younger days Cotton had been a crony of fellow sportsman and gambler George Osbaldeston and had tried his hand at billiards, riding and boxing as well as cricket.
As his debts mounted he turned to driving horse-drawn coaches.  In 1836 he bought “The Age”, driving it between London and Brighton to supplement his income,  sometimes  under  the  name  of  Sir  Vincent Twist.  In sporting circles this appears to have been seen as a noble enterprise although not everyone agreed.  In 1834, following an accident to the “Cambridge Star” driven by Cotton, the following comment was made in a letter from “A Traveller” to the Cambridge Chronicle:  “I have no such confidence in Sir St Vincent Cotton; and I consider the lives of our fellow-townsmen too serious a concern to be put to hazard for the gratification of the ambition of him or any other amateur whip who may wish to try experiments of his own skill at other people’s expence.”
1834 – A similar Cambridgeshire side to the 1832 ones, but without Pilch and Caldecourt, was twice beaten easily by a Nottingham side featuring the fast round arm bowling of Redgate and Barker.
1835 – Single wicket match on Parker’s Piece.  Charles Parnther, Wm Caldecourt and Samuel Redgate v Frank Fenner, Saunders and Fuller Pilch.  The former team won by 25 runs.
– Dan Hayward senior and West scored 112 and 105 for Chatteris v St Ives.
1822-37 – Cambridgeshire based players from this period included John Boning, John Crouch, Davies, David Bush Edwards, F P Fenner, J & W Hall, and Sussums from Cambridge and Dan Hayward, West Fryer and Glasscock from Chatteris.
1837 – Cambridge Town Club (CTC) formed to formalise the Cambridge town team which had represented the town since 1830.
See “1822-37” and “villages 1822-48” for details of matches during this period.
1838-43
Following a period in which Chatteris appear to have been effectively challenging Cambridge’s dominance, the latter again took the lead through the town team that evolved first into the Cambridge Town Club and then the Cambridge Town and County Club in 1844.
1838-43 – First of 4 joint Town and University sides which played MCC during a period of close co-operation between the two clubs.  The Cambridge Town Club, established at the second attempt in 1838, had some success but did not play many matches.
1844-48
1844 – Cambridge Town and County Club (CT&CC) formed  in order to improve the administration and performances of the CTC.  This was not strictly a county club but seems to have had ambitions to be so.
1844 – Charles Pryor scored 103 for CT&CC v CU in the Town and County’s debut match.
1844-7 – the Cambridge Town and County Club was phenomenally successful for four years, playing 26 matches and winning 19, including matches against Norfolk, the Auberies, Gravesend, MCC and Gentlemen of England among their defeated opponents.
1844-47 – players for CT&CC included Charles Arnold, Fred Bell, John Boning, Henry Cornwell, Alfred “Ducky” Diver, F P Fenner, Israel Haggis, Dan Hayward, RT King, OC Pell, Charles Pryor, Robert Ringwood,  and Thomas Snow.  FP Fenner was the club’s major all-rounder, Captain and Secretary.
1846 – Earl of Stamford and Lord Burghley opened a private ground behind Cambridge Town Gaol.  One of the matches played on this ground was an early match of I Zingari.  Arrowsmith and Hill, in their “History of I Zingari” refer to there being a, probably local to Cambridge, professional called Magniac who was down to play in this match, but did not, in the event do so.  From what I can tell there was no professional cricketer called “Magniac”, but there was a Bedfordshire family of that name known for its business dealings in China.  Charles Magniac of that family was a student at Trinity in 1846 so it is possible that he was known to Stamford and Burghley and had originally agreed to play,  “Scores and Biographies” has the name Magniac at number 11 but given as “absent”.  A report of this match in “The Anglo American” gives Magniac the title of “Mr” which again suggests that he was not a professional cricketer.
1847 – Lord Fitzwilliam ans T M Townley took on the private ground used by some university students.
1847 – Nicholas Wanostrocht, known as Felix, painted a picture of the Cambridge Town and County Club and University teams.  (See picture at head the home page.)  The picture looks unfinished, which may be due to the collapse of the town and county Club the following year.
1848 – By 1848 the Cambridge University club was also reasonably strong and some of its members asked Fenner to develop a private ground.  F P Fenner extended the field behind the gaol, combining two adjacent fields.  This became Fenner’s Cricket ground the home of the CU Cricket Club.
1848 – The CT&CC refused Fenner’s offer to play on his ground and folded without playing another match.

1822-48 – During this period cricket was played for the first time in or by Little Abbington, Walton & Walsoken, Bourn, Long Stowe, Duxford, Linton, Chesterton, Whittlesey, Caxton, Elm, French Drove, Fordham, Ashley, West Wratting, Borough Green, Balsham, Soham, Sawston, Comberton, Haslingfield, Barrington, Melbourne, Willingham, Swaffham, Parson Drove, Haddenham, Chippenham, Kirtling, Granchester, Over, Shepreth, Littlington, Swavesey, Foxton, Fowlmere, Harston, Thriplow, Elsworth, Toft, Cheveley, Guilden Morden and Hinxton.
See “1838-48” and “villages 1822-48” for details of matches during this period.
1848 onwards
From 1848 on the University Club had principal if not sole use of Fenner’s ground which was at least one factor in its gradual rise to first-class status.
Whilst cricket continued in Cambridge town, university and county it was not until 1857 that what has usually been seen as Cambridgeshire Cricket’s peak period began in the form of a highly successful county side.
In fact there was not one Cambridgeshire County Cricket Club during the period 1857-71 but several different bodies, some formal clubs such as the  Cambridge County Club and Cambridge Town Club and some not. County matches across this period were arranged when they could be afforded and a team  could be got  together.  Despite success on the field against the likes of Kent, Middlesex, Surrey and Yorkshire this was not a stable time for Cambridgeshire county cricket.  The Cambridge County Club had two periods of existence: 1858-63 and 1866-68.
The make-up of the sides varied a little but especially in the early and mid-sixties it was dominated by Cambridge town players such as Robert Carpenter, Tom Hayward, Alfred Diver, Fred Bell, Billy Buttress. Fred Reynolds and George Tarrant.  On several occasions the whole side was made up of Cambridge players.
The last of these matches was in 1871, against Surrey, and from then on there appears to have been little chance of a Cambridgeshire CCC reforming.
The next county club was formed in 1891 and joined the Minor Counties Championship.
See the “1857-71” page for a more in depth discussion of the county sides of this period. 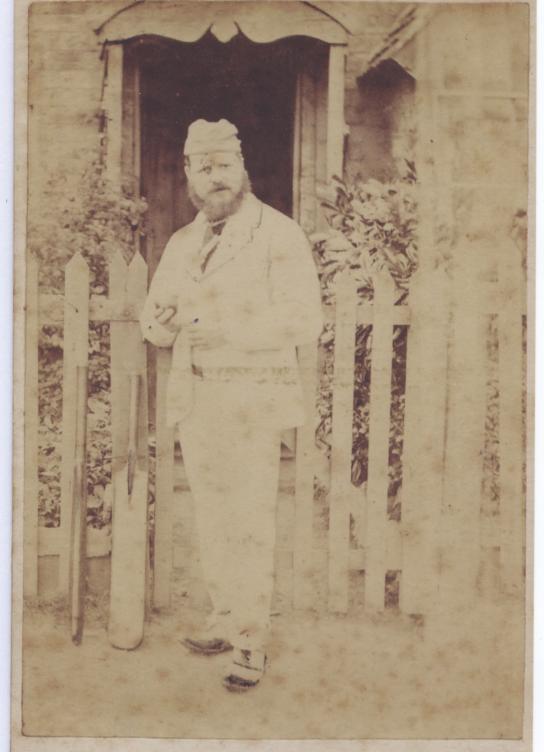